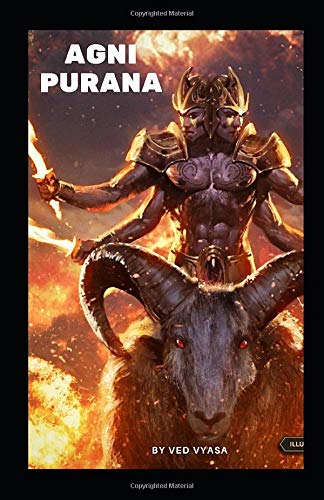 There are eighteen puranas in Hinduism. Agni Purana is one of them. There are various opinions whether Agni Purana is a Shaiva purana, Vishnu purana, Shakti purana or Smarta purana. So this purana is in many versions. This purana is divided into 382 or 383 chapters containing 12000 and 15000 verses. The earliest version of the purana was written in the 7th Century. But afterwards, over the centuries, many materials were added to the purana.

Agni purana is more an encyclopedia than a purana. It is said – The chapters of Agni purana deal with anything and everything. It may here be mentioned that in ancient times, knowledge was not explicitly systematized. You can find anything in any book. Agni purana is no exception to that. The range of topics covered by this text include cosmology, mythology, genealogy, politics, education system, iconography, taxation theories, organization of army, theories on proper causes for war, martial arts, diplomacy, local laws, building public projects, water distribution methods, trees and plants, medicine, design and architecture, gemology, grammar, metrics, poetry, food and agriculture, rituals, geography, and travel guide to Mithila, cultural history and other numerous topics.

This purana is named Agni purana because it was originally recited by Agni to the sage Vasistha, when the latter wanted to learn Brahman. An Indologist has said that all puranas are encyclopaedic. So it is difficult to say the date of writing. C. Dimmitt and Van Buitenon said –

As they exist today, the Puranas are a stratified literature. Each titled work consists of material that has grown by numerous accretions in successive historical eras. Thus, no purana has a single date of composition. It is as if, they were libraries to which new volumes have been continuously added, not necessarily at the end of the shelf, but randomly.

The first printed edition was edited by Rajendralal Mitra in the 1870s (Calcutta Asiatic Society of Bengal). An English translation was published in two volumes by Manmatha Nath Dutt in 1903-04. There are several versions published by different companies.

Agni Purana is a storehouse of knowledge. The subjects of the text are as below –

ambassadors to other kingdoms, system of administration

Thus, Agni purana is a treasure house of knowledge of ancient India. Those knowledge are still relevant in our time. Our ancient forefathers have left enough legacy for us to maintain an accomplished life.