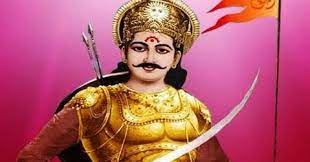 According to Hindu mythology, Mandhata was a king of Ikshvaku dynasty (solar dynasty) He was the son of Yuvanaswa. Mandhata had three sons – Purukutsa, Ambarisha and Muchakunda. When we hear very old things, people say – it has come from the time of Mandhata That means Mandhata was a very very old king – a legendary king. The hymn 134 of the tenth mandhata of Rig veda is attributed to Mandhata. Mandhata’s legend is cited in the Vana Parva, Drona Parva and Shanti Parva of Mahabharata. The birth of Mandhata is peculiar. His father Yuvanaswa was childless. Once he went on a hunting expedition is summer season and become thirsty. He saw a hermitage of a sage but found no one. The king saw a pitcher of water and drank it. When the sage comes to know it, he told the king that the water was meant for his wife to beget a child. But king became pregnant as he drank it. Sages and saints arrived to help him to give birth.

The left side of Yuvanaswa’s abdomen was slit open and brought the boby boy. Indra, King of Gods declared – He shall draw sustenance and dependence from me. So his name become Mandhata. Mam dhasyati iti Mandhata. Indra had full blessings on Mandhata. So there was adequate rain in the kingdom of Mandhata. Mandhata had wealthy kingdom. So his kingdom hed no taxes. Mandhata was a powerful king. It is said – He conqured the whole earth in one day. For Alexander, the great, it took seveval years to conquer the whole world. But for Mandhata, it took only one day.

He got victory over several kingdoms like maratta of ushivavriga, Asita, the Druhya king of Anyara, Nriga, Brihdratha of Anga, Suna, Jaya, Janmejaya, Sudhanwan, Gaya of Kanya Kubja, Gandhara and others Mandhata conquered patala loka, Bhuloka, half of swargaloka and became lord of three worlds. Mandhata performed hundred Aswamedha Yajnas and a hundred Rajasuya Yajnas. He built one Thousand magnificent palaces for the Goddess Shakti and Mandhata was an earnest devotee of shiva, Even Ravana, the king of Lanka who was feared by every one was fearful of Mandhata. Ravana was later defeated and slain by Rama, a descendent of Mandhata. Mandhata married Chandravanshi princess Bindumati, daughter of Shasavindu, king of yadavas, the couple had three sons and fifty daughters. His three sons – Purukutsa, Ambarisa and Muchukunda were equally famous.

It is ironic that Mandhata was killed by the Pasupata Astra of Lord Shiva who had given it to Lavanasur a relative of Ravana. Mandhata was devotee of Lord Shiva. But sadly Pasupata killed him. The dearest thing is the cause of concern in this wold. For Mandhata we feel sorry. But he was a legendary king. No doubt about it. Even now people of India remember mandhata who is a symbol of timelessness and eternity. The image of poverty in Kalahandi, Odisha and India has become deep-rooted