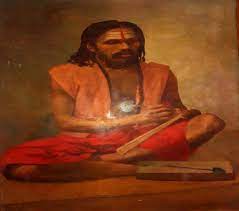 Sudramuni Sarala Das, who belongs to the fifteenth century, is celebrated as the first major poet, the aadikavi, of Odia literature. To him can be traced the origin of the puranic literature in Odia and no one’s contribution to this genre is richer and more impactful than his. He composed three Puranas(some say he composed only “Mahabharata”) and decidedly the best and the most renowned of these is “Mahabharata”, popularly known as “Sarala Mahabharata”. A truly remarkable work, it is a re-conceptualization of the ancient story of “Mahabharata” and is a creative re-telling of it in the Odia language. It is the first complete rendering (i.e., of all the eighteen Parvas) of “Vyasa Mahabharata” in any language.  And this is the first retelling of this great work in any language by a person who did not belong to a privileged caste.

In his magnum opus, Sarala asserted that he was born to expatiate on the Lila (divine play) of the Supreme God, Narayana. Thus, he used the story of the Kuru clan to celebrate the doings of Krishna, the purnaavatara (complete manifestation) of Narayana, and he called his Mahabharata “Vishnu Purana”. Quite appropriately, his narrative does not start with the sarpayajna (snake sacrifice) of King Janmejaya. The yajna was the Kuru King’s act of revenge for the killing of his father, King Parikshita, by the snake Takshaka. He was performing the sacrifice to get, not just Takshaka, but all the snakes destroyed in the sacrificial fire.

But Sarala’s retelling is situated in a different context.   VaibasutaManu, the lord of the aeon, pleads with the venerable sage Agastya (better known as Agasti) to tell him the way to attain moksha. And the sage tells him the story of Mahabharata. The story of the Kuru clan cannot be a moksha kavya– the Lila of Krishna is. And shravana (listening with complete devotion) is a form of bhakti and it constitutes a way to attain the Ultimate State. Agastya’sresponse to Vaibasuta Manu’s pleading reminds us of the great sage Suka in SrimadBhagavatav recounting the Lila of Krishna to King Parikshita in his last days. Parikshita had attained the Ultimate State before Takshaka bit him. The snake bit the body. By making his sage Agatya tell VaibastutaManu the story of Mahabharata, Sarala was telling his audience – immediate and the future – that Mahabharata is a moksha-giving story because it is the story of the doings of the PurnaAvatara Krishna. In his retelling,Sarala used episodes from Srimad Bhagavad, SkandaPurana, among others. And although Sarala Mahabharata does not contain the Bhagavad Gita, insights from it are there in many places in this remarkable composition.

So, did Sarala know Sanskrit?  It’s a question that has always been asked. Now, all one knows about him is from his own compositions. And he said in his Mahabharata that he was uneducated and dull and had no knowledge of the shastras and that he had spent his time among the unlettered and the untutored. One could dismiss the poet’s declarations about himself by saying that during those days, such lowering of the self was the riti (style) of poetic compositions. But then where did he learn Sanskrit? How did he acquire the knowledge of at least some Puranas and maybe even some shastras? One can assume that being a non- brahmin, he surely did not have the opportunity to learn Sanskrit at some place of learning – whatever formal system of education existed in his time. Did he have the opportunity of listening regularly to the learned brahmins’ explications of the Puranas? What was the forum for such explications? How often were these given? Now such exposure to works in Sanskrit can just not account for the range and the depth of his knowledge of the relevant literature that his Mahabharata demonstrates. So, what can one say by way of answering the question above? One could only speculate and one speculative answer is as good as any other.

There is a view that Sarala’s crediting the goddess for his Mahabharata was only a strategy to escape censor and possible persecution by the brahminical elite. After all, he was a non-brahmin, who had dared to retell Vyasa Mahabharata. But I am not persuaded. By saying what he did, wasn’t he saying that he enjoyed the special blessings of goddess Sarala? By saying that he was her child, wasn’t he asserting a very close relationship with the goddess? Were these claims more acceptable for the brahminical elite?

His retelling expressed his perspective on the ancient story. As is the case of the other celebrated re-tellers of the great classics in the Sanskrit language. Deviations from the original weren’t frowned upon in the retelling tradition in our country. The basic story remains unchanged but much is added and much is set aside in the retelling. Ramayanam does not tell exactly the same story as in Valmiki Ramayana, and neither does Tulsidas’sRamcharitmanas. Sarala’s Mahabharata deviates from Vyasa Mahabharata in many ways. In Sarala’s retelling, both Duryodhana and Sakuni, died, not in disgrace but with dignity. Duryodhana died, not as the Crown Prince of Hastinapura but as its King. Before he died, he had condemned Ashwasthama for killing Draupadi’s children and he breathed his last embracing the severed heads of the children. Sakuni was doomed to avenge his father’s and relatives’ murder by Duryodhana through treachery. His father had asked him to avenge their brutal killing.Sahadeva knew this, as did Krishna. Knowing that only Duryodhana was alive and that he could fall anytime, he could have returned to his kingdom to rule. On the battlefield, Sahadeva told him this in so many words. But chose to die as he held himself responsible for the war and the killing of his nephews, and of the innocent soldiers from both sides, whose war it was not.

Everyone in Sarala Mahabharata knew that Karna was Kunti’s eldest-born and on the Kurukshetra battlefield itself, before the war started, Yudhisthira had pleaded with him to join them and become the king after the war was won. Karna had never said or done anything to humiliate Draupadi. He maintained the dignity of his relationship with her as the wife of his younger brothers. Neither had Draupadi done anything that had humiliated Karna, even before her wedding. She hadn’t forbidden Karna to participate in the archery test; Karna had tried and failed. He wanted to win the test because he wanted Draupadi for Duryodhana, not for himself.

No one invited Yudhisthira to play a game of dice. Yudhisthira wanted to play the game he loved and he expressed his desire to Sakuni, who obliged. It was then that Sakuni thought that he could use that opportunity to create hostility between the Pandavas and the Kauravas. It was the Sun god’s divine spouses, who clothed Draupadi, not Krishna; the god paid her for what he had taken from her in an earlier existence of her. Thus it was her karma that protected her. The Avatara was only the facilitator; he had reminded Draupadi and the Sun god about their respective karma. These are just a few of the numerous differences between Sarala Mahabharata and Vyasa Mahabharata.

Keeping the basic story intact, Sarala introduced innovations into the narrative. He re-imagined the characters and their interactions and the situations in which they were involved and produced the masterpiece of a narrative that was as convincing and coherent as the original. The innovations reflected the poet’s understanding of the human condition, the nature of agency in a pre-determined world, karma and the inevitability of experiencing the fruits of it, the role of grace in the karmic framework, the nature of dharma, inner and external obstacles for living a life of dharma, divine intervention in the affairs of the mortals and the nature of PurnaAvatara, among much else. The poet reflected on the place of war in society, given its inherent sinfulness as the blood of the innocents flowed on the battlefield and he explored the possibility of alternatives to it.

As I close, I wish to say that despite the poet’s designating his work as “Vishnu Purana”, it has never got the status of a sacred text in the belief system of the Odias. People have the same attitude to this work as they have toward Vyasa Mahabharata. It is banished from home. There is no Mahabharata parayana – be it Vyasa’s Mahabharata or Sarala Mahabharata. It is not recited to the dying. But there is one difference: in the temple of goddess Sarala in Jhankad, the goddess who Sarala called his mother, is Sarala Mahabharata ritually recited – every day, as far as I know.

This truly remarkable work has not yet been translated fully into any language. It seems that more than a hundred years ago, parts of it were translated into Bengali but this translation is unavailable now. In recent years, the first two Parvas have been translated into Hindi and parts of two other Parvas, into English.