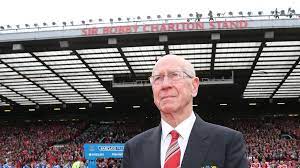 Sir Bobby Charlton is a former English footballer who is considered as one of the best players of all time. In England only respectable persons are given title – Sir. Sir Winston Churchill, Sir Clement Atlee and others. Accordingly, Bobby Charlton has been given title of Sir considering his respectability in the field of soccer.

Bobby Charlton was born on 11 October 1937 in Ashington, United Kingdom. He was playing as a midfielder as well as a forward. He was a member of the England squad that won the 1966 world cup which was played on the home ground. England, the birthplace of football has won the world cup only for once. The 1966 team was an outstanding team having the players like Jack Charlton (Bobby Charlton’s elder brother), Geoff Hurst, Bobby Moore and others. The main credit goes to the team manager – Alf Ramsey. He was an excellent coach unlike any other coach of the time. His presence was enough for the team. Later on, Rene Michael, the Dutch coach of the 1974 world cup was of the same standard. He invented the concept of total football in the leadership of legendary Johan Cruyff – the flying Dutch. The Dutch team of the seventies put fear of God in their rivals. Then in 2010, Spain manager Delbosque was a fatherly figure. He led the Spain to world cup victory by tiki-taka football of short passes. So, these three coaches revolutionized the world football.

In 1966 Alf Ramsey would not have been successful without Bobby Charlton and of course the famous goal keeper – Gordon Banks who, in the next world cup 1970, was credited with the famous save from Pele. Gordon Banks was a tough customer for Pele. However, in 1966 the English team under Bobby Charlton was simply outstanding. In the semi-final match against Portugal, there was keen contest. The famous Portuguese player was Eusebio, who sweeps away every thing on the field. That match was a fight between Eusebio and Bobby Charlton. Eusebio was a better player; but that was Bobby Charlton’s day. Bobby Charlton won the day and went into the final. Eusebio left the field with tears.

In the final match against West Germany Bobby Charlton was excellent. His soccer personality was such that the West German manager instructed the defender Franz Beckenbauer – his sole duty was only to guard Bobby Charlton. England won the world cup – 4 – 2.

From 1957 to 1973 he made a total of 106 international appearances for England. A forward of the Manchester United team from 1954 to 1973. Charlton survived an airplane crash near Munich, West Germany on February 6, 1958 in which 08 Manchester United players were killed.

In the field, Charlton was more an inspiration than a player. His presence motivated the players and played up to their utmost capacity. England should have won another world cup under him.

But it cannot be denied that Bobby Charlton was a superb player. He has authored many books also –

Among the greats of football, Bobby Charlton is one. The Sir – title is really applicable to him – Sir Bobby Charlton, the name which will be written in golden letters in English as well as world football.