When there is a beginning, there is an end. This world was created in the remote past. So, sometime or other, it will come to an end. But nobody can tell when. It should be remembered that this world is somehow built on moral foundation. In the long run it is good with the good and bad with the bad. In the moral context time has been divided into four stages – Satya, Treta, Dwapara and Kali.

In the Satya yuga there was hundred percent morality, in the Treta yuga, seventy-five percent, in Dwapara yuga, fifty percent and in Kali yuga only twenty-five percent. Now we are in Kali yuga having only one fourth morality. So life has degraded in Kali yuga. Therefore, we have to pay price for it. So, people are saying – the world will come to an end.

In every religious texts, there is mention of Pralay either by water or fire. In Vishnu Purana, it is mentioned that divine things will withdraw from the world towards the end of Kali yuga.

At present it seems – the world will end. But it will not end. Only unrighteous people will be removed from this world. The world population will be severely reduced. Still there is time for the deluge (Pralay).

The world is travailing for perfection. But the mode of travail is mindless and immoral. In the name of modernity man is losing his/her tradition which is age old. There is no respect for tradition. Young girls are wearing revealing dresses. Hair is left uncombed. These are ominous signs for our civilization.

Again, we are leading a fashionable life. We are celebrating birthdays ostentatiously. These are unnecessary things. This is utter waste of human endeavour.

The Mauryan Emperor Ashoka has advised in his rock inscriptions that certain moralities are to be observed for a simple and happy life. These moralities will bring happiness not only in this world but in the ‘Parlok’ after death. He has also mentioned specifically that unnecessary expenditures should not be incurred. It is a waste of money.

We are forgetting Ashoka’s ideals and morals. Some of Ashoka’s morals are – respect for elders, kindness to animals and birds, not to kill animals and birds for food, harmonious relation with relatives, leading a peaceful life having limited resources, giving financial assistance to poor people of society, giving service to old parents, giving proper respect to Sramanas and Sanyasis. And the list goes on.

If we abide by the social and moral rules of Ashoka, certainly we will be in good stead in life. And will have a longer life. Our sojourn in life will increase. And the world will also continue to exist. There would be no fear for ‘Pralaya’.

What about our present apprehension? The world will end or not? No doubt most of the people are going on the wrong path. Still there are some handful of persons who are morally alright. They will assist the world to keep going. But if we do not leave the fashionable life soon, the world will end. Nobody can save it.

So, now it is a high time that we should awake. The Upanishads also say – arise and awake by imitating the great men. Save the world. This gross outer world is the perimeter of a circle. If we proceed towards the centre of the circle, then life would be simpler and simpler. And when we reach the centre, that is the dwelling place of God – That is the simplest existence and permanent existence.

O, people of the world, please come to the real existence and save the world. Good wishes to all.

( The views expressed are the writer’s own. )

Income tax officer, Sambalpur. He is a Freelance writer. His articles have been published in some Oriya dailies like Sambad, Samaj, Dharitri and English dailies like The Telegraph and in a sociological journal “Folklore” from Calcutta. 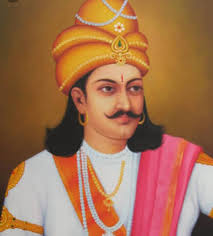 King Ashoka and his ideals