On this day we must remember with much respect those who sacrificed their lives in Dacca in 1952 for the cause of their language. In 1948, the government of Pakistan declared Urdu as the sole state language of Pakistan. This led to protests in Bengali-speaking East Pakistan. They demanded that Bengali be accorded the status of the state language of the country, along with Urdu. The government of Pakistan rejected their demand. On this day in 1952, a large number of students and other citizens had gathered at Dacca university to protest against the government’s decision. The police fired at the demonstrators, which resulted in the death of some students. This was very probably the first time a language movement had its martyrs.

In 1999, UNESCO declared February 21 to be the International Mother Language Day and underlined the importance of the preservation and the protection of all languages. The best way to achieve this laudable and inclusive objectiveis, in our view, to provide for education in the mother languageof the learner in, at least, the early stage. Years before, UNESCO had indeed emphasized the importance of primary education in the child’s mother languagein the form of a recommendation.

There is sound justification for this from the point of view of language learning. It needs to be noted that in making the recommendation, UNESCOobviously did not have in mind literate languages with a literary tradition, such as Odia, Tamil, Hindi, Bengali, Telugu, etc., restricting the list to the Indian languages. It is well-known that for decades, these languages have been used as the medium of instruction up to the high school stage. The recommendation was really intended for what is called these days the “endangered languages” – languages at different threat-levels with respect to their existence.

As a result, the Adivasi child does not enjoy the benefits of mother language education. Solving this difficult problem is not the responsibility of the government alone. Societal commitment is also necessary for the purpose. A healthy society dedicates itself to the “rise of all”. A collective societal will can meaningfully contribute to the formulation of the right governmental policy and to its proper implementation.

To repeat, for the sake of emphasis, the adivasi languages can be empowered most effectively if they are used in the domain of education at the primary level at least. For this to happen, reading material must be prepared in these languages. Children must read stories, read about their own environment, about physical well-being, cultural practices, basic human values and the likein their own language. Details, although important, are out of place here.

Now, what of languages that have no script? How can reading material be prepared in these languages, without which they cannot obviously be used for education. In our view, the issue of script is not as vexing as it is often taken to be. It is so because when this question arises with respect to a certain language, the concerned persons think in terms of devising a script for it. It is not necessary in every case. An existing script can be shared. There is nothing new about it.

Consider the case of Sanskrit. Samanta Chandra Shekhar’s Siddhanta Darpana was written in Sanskrit language but in Odia script. It was not an exceptional case. Even today, Sanskrit is not written in one script throughout the country. At the high school stage in Odisha, it is written in Odia script; the same is true of West Bengal and possibly of some other states. Hindi, Marathi, Konkani and Nepali are all written in Devnagari script. For a language to have its own script is not at all a matter of prestige, although it has sometimes been taken to be so.

For an adivasi language the script of the main language of the relevant state can be adopted. That would later prove to be an advantage to the child as he starts learning that language soon after his primary education. His learning load would be reduced because he would only have to learn the language, not the script.All those concerned with the issue of script for an oral language could consider this suggestion. Our concern is that the script issue must not delay the empowerment of the language concerned. And connected with its empowerment, is its survival and at a different level, the possibility of the emergence of an inclusive world.

Odia enters the present discussion in a different way. Linguists, language-educationists, thinkers, and language activists in Odisha have been saying of late thatOdia has to become the language of modern knowledge in science, technology, humanities, social sciences, etc. In other words, it has to be modernized. It is only then that it can become the language of opportunity.

All this is correct. But there is something really serious – almost alarming – which is not getting attention, which has not become a talking point in public. On the basis of the findings of several surveys conducted by different competent bodies, the Sunday Times of India published a write-up (February 23, 2020) entitled “More kids in school but most can’t read even mother tongue”. At least one survey has covered Odisha. According to it, roughly speaking, even after three years at school, quite a few children are unable to read isolated words in Odia, let alone sentences, correctly. Besides, some pronounce the letters of a word one by one and then pronounce the word. Education in the mother language is meaningless if this happens to be the state of affairs.

May “The International Mother Language Day 2021” alert us to the imperatives of real mother language education for all in, at least, the specific context of our State. 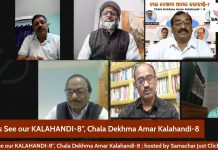